At the Department of Ophthalmology at the Medical University of Vienna, we work together with some of the most senior scientists in the area of ophthalmic diseases.

The main focus of our studies are

Age-related Macular Degeneration is the leading cause of blindness in the industrialized world. Early and intermediate AMD are characterized by fundus changes in the posterior pole such as drusen (whitish/yellowish deposits of mainly lipids and proteins between the retinal pigment epithelium (RPE) and the Bruch’s membrane) and RPE abnormalities such as hyper- and hypopigmentations. In the advanced stages of dry AMD a complete atrophy of the RPE, a so called geographic atrophy (GA) develops, leading to severe irreversible visual impairment. The exact pathomechenism of the disease is still unknown, but there is evidence that genetic, environmental and inflammatory components play roles. In recent years research started to gain momentum in the field of dry AMD therapy, especially in case of advanced dry AMD with geographic atrophy. 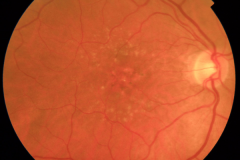 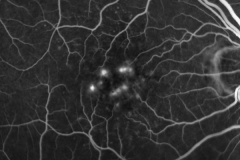 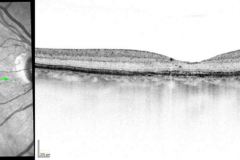 Neovascular AMD is an advanced form of AMD (alongside with GA), and can develop from any stage of dry AMD. In nAMD a neovascular complex either originating from the choroid or from the retina (choroidal neovascularisation (CNV) or retinal angiomatous proliferation (RAP) respectively) arises. This causes exudation of fluids or blood in different retinal compartment, ultimately causing fibrosis and severe visual impairment. In the last decade the development of anti-vascular endothelial growth factor therapies (Anti-VEGF) revolutionized the way we treat and the way we examine nAMD patients. Further progress in understanding this disease was enhanced by the development of optical coherence tomography (OCT) technology. 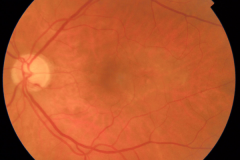 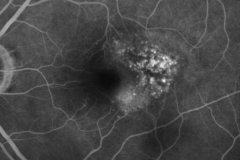 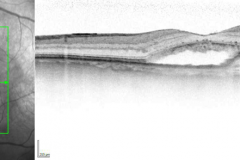 Diabetic retinopathy is one of the leading cause of visual impairment in the working-age population. With the increasing number of patients with diabetes mellitus, diabetic retinopathy (with a prevalence of approximately 35% of adults (40+ years) with diabetes) is about to be a major healthcare issue. The key point in the pathophysiology of diabetic retinopathy is the development of capillary endothelial dysfunction. Although the cause is still unclear, this leads to capillary nonperfusion, outpouching of the capillary walls (microaneurysm), and increased vascular permeability. Clinical signs of diabetic retinopathy NPDR are microaneurysms, intraretinal hemorrhages, and in more advanced NPDR forms cotton wool spots, intraretinal microvascular abnormalities (IRMA) and venous abnormalities such as beadings and loop formation. An even more advanced stage of the disease is proliferative diabetic retinopathy (PDR) characterized by the formation of neovascularisations (NV) on the surface of the retina, which can cause severe visual decrease by causing vitreous hemorrhages or retinal detachments. Another complication of PDR is neovascularization in the anterior segment of the eye leading to neovascular glaucoma. Recent studies showed, that Anti-VEGF therapy leads to the regression of diabetic retinopathy. 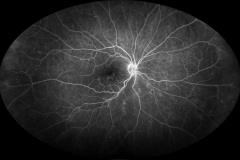 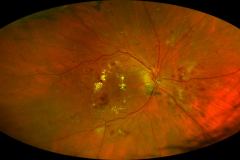 Diabetic macular edema (DME) is a sight threatening sequel of diabetes mellitus. DME can evolve in any stage of diabetic retinopathy. In DME fluid accumulates in the fovea due to increased vascular permeability. Although the pathomechanism DME is thought to be multicausal, increased secretion of VEGF plays a pivotal role, and studies has shown that anti-VEGF therapy is highly effective in its treatment. 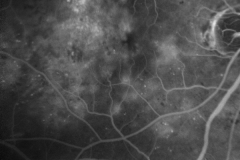 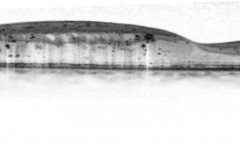 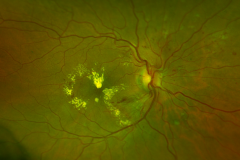 Retinal vein occlusions are common retinal diseases. The most widely accepted theory of the pathogenesis of thrombotic occlusion in retinal veins is due to hemodynamic disturbances caused by compression by rigid retinal arteries due to arteriosclerotic changes. These hemodynamic disturbances cause endothelial damage, and thrombus formation. Due to the reduced blood outflow the intraluminal pressure rises, and causes widespread capillary endothelial damage. Depending on the location of the occlusion RVOs are divided in to distinct forms: if the occlusion occurs in the optic nerve head it is called central retinal vein occlusion (CRVO), if the occlusion occurs more distal in a vein branch, than it is called branch vein occlusion (BRVO), in some cases due to anatomic variations only the upper or lower central vein trunk is occluded, these cases are called hemi-CRVO. In general, the less retinal area is affected by the occlusion the better the prognosis of the disease is. Macular edema due to increased vascular permeability can occur both in BRVO and in CRVO, and can be treated with anti-VEGF therapy or intravitreal corticosteroids. The most feared complication of RVO is widespread retina ischemia due to permanent capillary destruction, which may lead to neovascularisation formation (NV) both in the posterior and the anterior segment of the eye, later resulting in secondary elevated intraocular pressure. 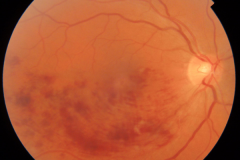 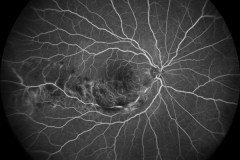 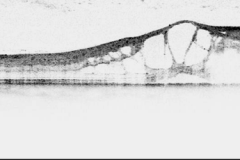 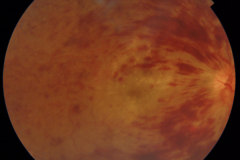 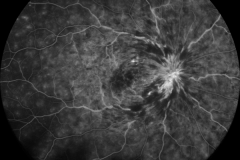 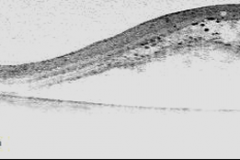 Retinopathy of prematurity is a vasoproliferative disease affecting extremely premature infants, where the normal development of the retinal vasculature is still incomplete, and the retina is vulnerable to exposure to hyperoxia. Low birth weight and young gestation age and accompanying diseases are the associated risk factors. Disease severity is scored based on the location of the demarcation line/ridge between vascularised and nonvascularised retina (zones I-III), the stage of the demarcation line/ridge (stage I (only a demarcation line) to stage V (total retinal detachment)), and the presence of plus disease (dilatation and tortuosity of the vessels on the posterior pole). ROP may regress spontaneously, but more advanced stages require treatment in order to reduce the risk of progression to advanced stages. Traditionally the treatment of ROP was laser photocoagulation of the nonvascularised retina. Recent studies show increasing evidence that anti-VEGF therapy may be an effective therapy of the disease. 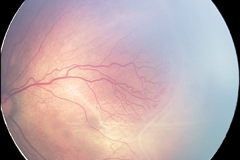 Multiple sclerosis is an immune-mediated inflammatory disease. The targets of the autoimmune process are myelinated axons in the central nervous system (CNS) including the optic nerve. The disease usually shows an episodic course, and can cause significant damage in the sensory and motoric nerve apparatus. In recent years numerous publications reported a statistically significant thinning of the peripapillar retinal nerve fiber layer (RNFL) and retinal ganglion cell layer (GCL). Currently large longitudinal studies investigate whether OCT could be a useful surrogate measure in the monitoring of patients with MS.

We are using only strictly necessary cookies to give you the best experience on our website.
We do not use any statistical/marketing or 3rd party cookies. Find out more: settings

Our website uses so-called cookies. Cookies are small text files that are usually stored in the browser of the visitor’s end device for the duration of the current session, i.e. until the browser is closed. Some cookies remain stored on your end device until you delete them. They enable us to recognize your browser on your next visit. If you do not want this, you can set up your browser so that it informs you about the setting of cookies and you only allow this in individual cases. Only functional cookies are used on this website, i.e. cookies that are necessary for the operation of this website. We do not use any statistical or marketing related cookies or similar.

Read more under our Data protection

Strictly Necessary Cookie should be enabled at all times so that we can save your preferences for cookie settings.

If you disable this cookie, we will not be able to save your preferences. This means that every time you visit this website you will need to enable or disable cookies again.